Enjoy the Prime of Your Life with Classic

Classic Club is another way we enjoy giving our customers the special treatment they deserve. You are eligible to join if you have celebrated your 50th birthday, are a bank customer, and have a combined $2,500 in your accounts. 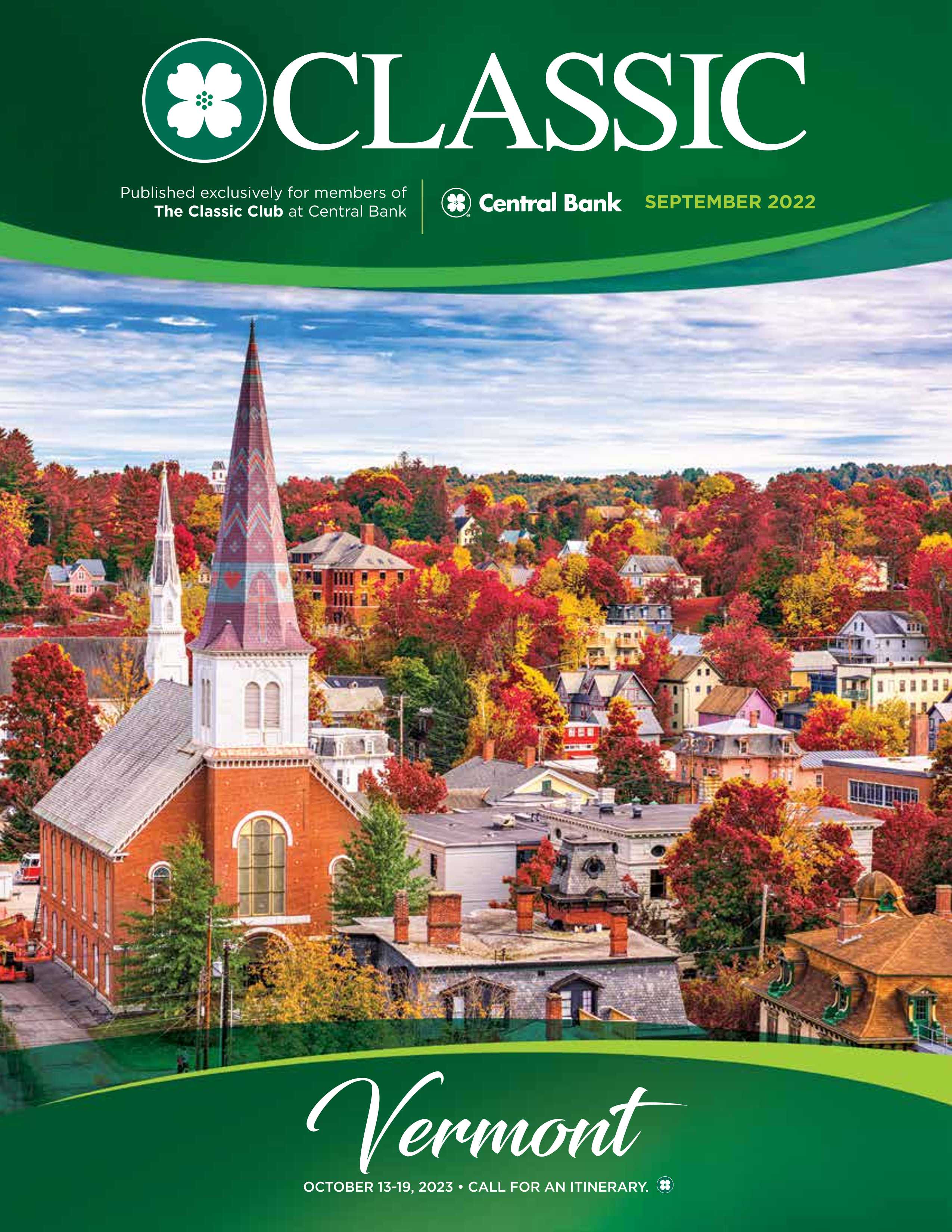 Classic offers a wide variety of domestic and international trips throughout the year. Traveling with a Central Bank escort, members can explore places like the deserts of Africa, the high peaks of the Rockies, or the rolling hills of Ireland. Group travel allows you to meet new people, see new places, and make lifetime friendships!

Waste no time getting to the core of Irish culture! From the Irish people’s sparkling wit and inviting pub culture to the isles’ incredible landscapes, this small country packs quite a punch. Get to know this beautiful island on a tour of its leading cities and natural wonders, from the Dingle peninsula to the Cliffs of Moher.

Scotland’s history and culture take center stage as you explore medieval cities, rugged highlands and seaside villages on this 10-day tour. From Edinburgh, up to the Orkney Islands and around the northwest coast of Isle of Sky and ending in Glasgow, you will get a chance to see a different version of Scotland that only the locals get to experience!

Highlights of the tour include: Athens City Tour, The Acropolis and Parthenon, The Acropolis Museum, The Plaka and Syntagma Square, Ancient Olympic Stadium, Mykonos, Delos Tour, Santorini Tour, Santorini Winery Visit and tasting, Ola Village Walking Tour and Greek Ferry rides. All this and so much more on this Greek Island Tour.

Experience the best of the South Caribbean! Sailing round-trip from Fort Lauderdale, the brand new Sky Princess will make 6 exciting calls during this 10 day voyage! This is your chance to try snorkeling, world-class diving, pristine beaches and view amazing aquatic sea life in it’s natural habitat, all while unpacking only once!

It’s the biggest rock show to never happen…until now! Rated as one of the top Elvis Tribute Artists in the world, Victor Trevino Jr. has sold out concerts in Australia, Brazil, Canada, Mexico and across Europe. Joining him will be Dominique Scott as Jerry Lee Lewis and all his keyboard-pounding antics and talent.

Four women at a lingerie sale have nothing in common but a black lace bra… AND memory loss, hot flashes, night sweats, not enough sex and more! This hilarious musical parody is set to classic tunes from the 60’s, 70’s, and 80’s that are sure to have you dancing in the aisles. It’s the hilarious celebration of women and “The Change”.

Based on a true story about Patsy’s friendship and correspondence with Louise, a fan from Houston. This musical play come complete with down home country humor, true emotion, and many of Patsy’s unforgettable hits such as Crazy, I Fall to Pieces, Sweet Dreams, Walking After Midnight and more!

Bernard is planning a romantic weekend with his mistress. What could go wrong? Follow Bernard, his wife Jacqueline and his best friend Robert, through this farce on a night of romance, mistaken identity, secret lovers, a cook who becomes a mistress and a mistress who can’t cook. Slamming doors, fast-pacing, and quick wit make for one hilarious evening romp.

The show audiences insisted we bring back! The smash hit musical inspired by the famed recording session that brought together rock ‘n’ roll icons Elvis Presley, Johnny Cash, Jerry Lee Lewis and Car Perkins for the first and only time. One of the greatest jam sessions ever, MILLION DOLLAR QUARTET brings that legendary night to life featuring a score of rock hits.

A new musical adaptation of the beloved novel and the hit Disney films. When an overworked mother and her teenage daughter magically swap bodies, they come to appreciate one another’s struggles, learn self-acceptance, and realize the immeasurable love and mutual respect than bond a mother and daughter.

Payment is due at the time of your reservation
Price includes lunch, matinee performance & transportation
Motor Coach will depart from Platte City Main and pick up at Parkville 45
Due to the current Covid-19 situation, schedule is subject to change