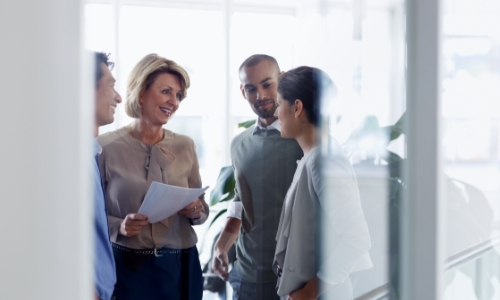 When starting a business, many entrepreneurs focus on what the end product will be. It's important that consumers react well to their business products or services in order for the company to grow and prosper. However, it's also important to look within the company to ensure employees are happy and healthy.

Building a good work culture is important because the business depends on its employees for success. Every employee should believe in the business and want it to succeed. Company culture doesn't just happen, though. It's something that needs to be deliberately formed, beginning with the founders and passed down with each new hire.

Begin at the top
An entrepreneur can iterate a company's culture every day, but only when he or she leads by example will it be taken seriously and be effective, Todd McKinnon, CEO of Okta, a startup he began in 2009 to help advance businesses and their IT departments wrote in Forbes [1]. If you tell your employees that your company should have a collaborative environment that encourages teamwork, then the leaders need to work as a part of the team, too. If they don't, every mention of "teamwork" won't be taken seriously and that collaborative culture will begin to degrade.

While it's important that the leadership team needs to work within the company culture and demonstrate a good example, it's not always enough to enforce it. Instead, McKinnon suggested appointing one person to this role. It doesn't always have to be the person hiring new people or training them in; it just needs to be someone who will be good at encouraging others to work in line with the culture.

Hire the right people
At the beginning, your company will be small. You and a few others, like co-founders or investors, will discuss almost every decision as a team. But as you do well and grow and more people are hired, big decisions will be made among the minority of the company. The CEO won't necessarily know the names and roles of every single person on the payroll. As such, it's important that every new hire fits well within the company culture if it is to succeed.

Fast Company explained that hiring the right people was what Ken Thomson, a successful Canadian businessman, considered the first step toward building a good company culture [2]. While it's important that candidates have the right education and qualifications for a position, their attitude and ability to adapt to your culture is even more important.

Norm Brodsky, founder of New York City's CitiStorage, a records management company and an Inc. columnist, told Inc. Magazine he also aims to hire the right person based on how they fit into a company, not just their credentials.

"It takes almost a year to find out what people who work for you are like," Brodsky said. "We give every new hire 90 days probation. I hire for attitude not for aptitude; we can train for the skills we need them to have. Education is the key to sustainability of your culture while you are growing."

Bond
It's important to get to know your employees to truly understand how well the culture is being enforced. McKinnon suggested holding an offsite get together and open up a conversation. Ask employees what they value about the culture, what they think it is, what they don't like, and so on. Getting these questions out in the open through employee engagement will remind people what the culture should look like, and it will shed a light on problems within the company culture.

Larry O'Toole, the founder of Boston's Gentle Giant, a moving company, told Inc. Magazine that he has a tradition with all new hires that gives them an idea of what the company expects from everyone: He requests that they run the stairs at Harvard stadium.

"Everyone in the service industry has to come up with a test to form camaraderie around," Toole explained. "It's not how fast you run in the stadium, it's that you do your best," says O'Toole. "We're looking for people who want to give 100 percent."

Bonding doesn't just happen at offsite meetings and during a person's first few weeks. It should be happening consistently throughout each employee's tenure at the company. Entrepreneur said one way many companies do this is through recognition, rewards, career development and social outings [3]. These are all important to forming a good company culture. They tell employees they are needed and valued. They also give people the opportunity to interact on a personal level, rather than strictly business. Be sure to continue the traditions your company has. Your employees likely look forward to these events and opportunities.

Building a company culture can take hard work and focus. But if you do your best to communicate what you want your company's culture to be and work to enforce and encourage it, your employees will be happier.

Should you Become a Landlord? Here’s what to consider

Should You Hire a Property Manager?

How to Stay Ahead of Rising Inflation Rates

How to Manage Your Business’s Online Reputation

How a Four-Day Work Week Can Save Your Business Money