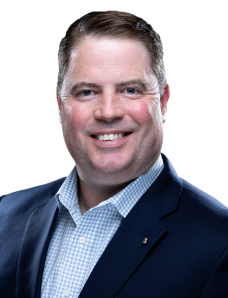 Jack was born and raised in Medford, OK and attended Southwest Baptist University in Bolivar, MO where he graduated in 1996. Following his graduation Jack enrolled in the MBA program at Missouri State University and earned his MBA in Finance in 2002. In 2001, Jack and his wife relocated to Lake of the Ozarks at which time he joined Central Bank. With Central Bank, Jack has worked as a Manager Trainee, Credit Analyst, and in 2004 he was promoted to a Commercial Loan Officer. In 2016, Jack was promoted to his current position as Senior Vice President of Lending.

Jack is involved in several community organizations including serving as Treasurer for Mt. Carmel Baptist Church and for the School of the Osage Foundation. Jack is married to Amy Funderburk who is the Nurse Manger of the Emergency Department at Lake Regional Health System. Jack and Amy have three children, Samantha, Luke, and Jackson.

¹Additional service fee applies. By clicking 'Continue', you will leave our website and enter a site specific to making your loan payment via a debit card or electronic check.